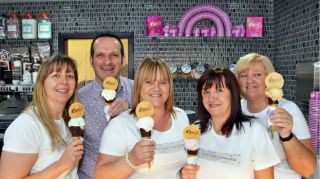 Everyone loves ice cream – so what better way to raise money for a brilliant local charity than by dishing up Equi’s award winning ice cream to the generous people of Motherwell?

On Sunday May 12, customers at our brand new ice cream parlour in Motherwell’s Merry Street helped raise money for the Motherwell Dementia Café. Everyone who popped by could get a regular cone for a minimum 50p donation, so you can imagine how long the queues were!

Owner David Equi said: “We’ve heard all about the wonderful work the cafe has been doing over the last year and we thought we’d like to help in some way.

“Dementia is an issue which is affecting more people these days and we’re sure many of our customers will know of someone who’s been affected in some way.

“We thought holding a day like this would be a good way to promote the fantastic work the cafe does and directly help it in some way.

“Every penny raised on the regular cones on that day will go directly to the dementia cafe.”

The Motherwell dementia cafe provides a space where those who are worried about their memory, their families and carers, can gather, share their experiences and get practical support in a friendly setting.

“This is a wonderful gesture by Equi’s and I can’t thank them enough for their support.”