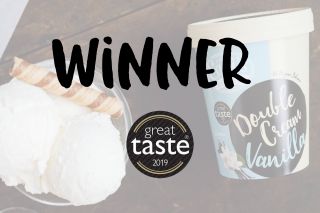 And our Passionfruit Sorbet was announced “positively sparkling with flavour” and “astonishingly creamy”.

But that’s not all…

Strawberry Ripple was one of the flavours to impress the panel – a real “wow product” according to one judge – while our White Chocolate and Lime Cheesecake was praised for its “creamy texture”, richness and zest.

Established in 1994 by The Guild of Fine Food, the awards impose the most rigorous quality and taste standards on the industry.

They’re what the Booker Prize is to books or what Crufts is to dogs – whichever you prefer.

The judging panel comprises the most discerning foodies around, including Olia Hercules, Kenny Tutt and Kavi Thakar, as well as a host of industry experts and buyers from the likes of Fortnum & Mason and Selfridges.

Previously, Equi’s best ever Great Taste showing was winning six awards in 2017, so we’re delighted we’ve broken our own record this year. Boom!

David Equi, MD and Chief Ice Cream Tester, was thrilled with the outcome.

“To win and compete alongside some of the UK’s very best producers is a massive honor,” he said of the results.

“We’ve got a great team who continue to create the very best ice cream. We’ve got a lot of exciting plans in the pipeline and I’m looking forward to seeing what the rest of the year has in store for us.”

Our award-winning ice cream is available in over 250 shops, cafes, restaurants and ice cream parlours in Scotland. Find your closest Equi’s stockist here.