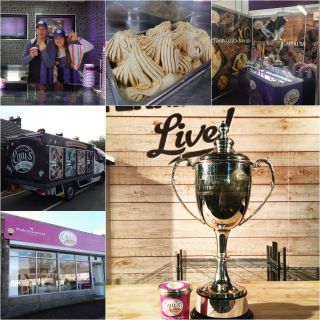 Well 2016, it’s been fun! We’ve had another record breaking year and we’re so thankful for all of our customers’ support – both from the wholesale side of the business and from our own shops and ice cream parlours. We have a lot planned for 2017 but first we need to take a minute to look back at what we achieved in 2016.

It’s official, our ice cream is the best in Scotland! For the 5th time, we won took home the prize for Scottish Ice Cream Champion of Champion for our Honey & Quinoa ice cream. The sweet and nutty combination won the heart of industry experts and we were even featured on BBC Scotland! At the same competition, our Double Cream Vanilla Ice Cream was named best vanilla ice cream in Scotland for the eighth time in a row! No pressure for 29017 then…

At the start of the year we left sunny Glasgow for Aberdeen to help the latest member of our team set up the first ever Equi franchise. It’s been a super busy year for Equi’s Aberdeen who are selling our award winning ice cream, milkshakes and all sorts of sweet treats. They even started selling ice cream cakes! Want to see more?

Our events team have clocked up the miles this year! Throughout the summer we loaded up our scoops for pop ups in Topshop, Jenners and Harvey Nicols. The Equi mobile took up residence over in Callendar Park in Falkirk and over at the Broomielaw as part of Good Food Glasgow. On top of that our sales team headed to our first ever trade show in London at the Speciality and Fine Food Fair. We’ve meet so many amazing and encouraging ice cream lovers and the most inspiring artisan food producers throughout the UK.  Like our Facebook page to keep up to date with upcoming events!

2016 was definitely the year of the collaboration! We teamed up with some amazing food producers from Isle of Skye Sea Salt and breweries like Beehive Brae to The Fudge Kitchen and Mademoiselle Macaron in Edinburgh. Although they were all delicious, the feedback from our salted caramel ice cream using Isle of Skye Sea Salt was so fabulous that we added it as a permanent flavour and Equi’s Isle of Skye Sea Salt & Caramel is now being sold in Asda stores across central Scotland!